Cheese is a perfect fit for today’s healthy dietary trends

With so many different diets and health trends competing for consumers’ interest and commitment, choosing the right main ingredients to focus on might seem daunting. And with so many diets focused on protein, it would seem that sources must be limited to meat and poultry. But cheese is a perfect crossover ingredient to fill the bill for a number of eating trends, including low-carb diets, specifically high-protein diets, such as the Ketogenic Diet; Low-Glycemic Index diet (low GI); the MCT (medium-chain triglycerides) diet; and, for some, even certain vegetarian diets.

Most cheese is 40-60% protein, with the balance of calories coming from a mixture of fat compounds that include heart-and brain-healthy omega fatty acids, various saturated fats, and MCTs (medium-chain triglycerides). With a wealth of science revising what we know about dietary fat and health, American consumers are seeking out the foods that not only contain these vital and satisfying components but also provide flavorful pleasure that they no longer need to avoid. Cheese fits the healthy eating profile in more ways than good protein and healthy fats. It provides the vitamins A, B12, D, and K. Minerals also abound in cheese, not only including the well-known high calcium amounts but phosphorous, zinc, and other minerals.

For diets that promote healthy protein and fat, cheese could almost be said to be essential. It is one of the few foods that can provide a natural source of not only those macronutrients but important micronutrients, including vitamins, minerals, and, in some cases, probiotic bacteria. There even is evidence that, as a high-calcium food, cheese could function as a prebiotic, feeding the beneficial microbes that already thrive in the digestive tract.

The ketogenic diet is an especially popular diet now and cheese slots right into the plan. The idea behind this diet is that, by reducing carbohydrates in the diet, the body is forced to use fat for energy. But not all fats are equally ketogenic. MCTs, it happens, are highly ketogenic and cheese, being a good supplier of MCTs is what allows it to work well as a component in the diet while providing other nutrients to balance out bodily needs.

Among the healthful omega fatty acids in cheese is Conjugated Linoleic Acid (CLA). CLA is a polyunsaturated fat that has gained attention for its ability to aid in weight loss. Not only is the weight loss a result of reducing body fat, there also have been studies suggesting that CLA can actually help the body build muscle in place of the fat. Other studies have yielded evidence that CLA helps lower the risk of diabetes, heart disease, and certain cancers.

Many of these components, especially calcium, CLA, and vitamins such as B12 and D, are in minimal supply in vegetarian diets. For so-called lactovegetarians (vegetarians who consumer dairy products), cheese can be the difference between a healthy diet plan and a diet disaster. Strict vegetarians will, however, seek cheeses made without animal rennet. Some parmesan cheeses, soft goat cheese (chévre), blue cheeses, brine-cured feta, ricotta, and fresh mozzarella are commonly animal rennet-free.

PROTEIN PRO
As a protein source, cheese boasts highly bioavailable forms of the nutrient. And the more aged a cheese is (think parmesan), the more protein it has per ounce and the more bioavailable its protein is. The main protein in cheese is casein. It’s a particularly beneficial protein in that it digests slowly, gradually releasing its amino acids — the building blocks of protein — into the bloodstream. This is why cheese, while having a concentrated caloric value per ounce, is actually a dieter’s best friend by having high satiety, reducing hunger for hours.

As a high-protein food, cheese provides a full complement of 20 amino acids, including the nine essential ones. The amino acid profile among most cheeses is similar and well-balanced, but some aged cheeses tend to have a higher percentage of lysine, tyrosine, and tryptophan.

Lysine is one of the nine essential amino acids (meaning they must come from the diet) and is needed for protein synthesis, including making hormones and enzymes. It also is a key component for generating energy and producing and metabolizing calcium — a critical mineral for bone, collagen, and muscle health and that cheese is also an excellent source of.

Tyrosine actually gets its name from cheese. “Tyros” is Greek for cheese. It is needed for creating the neurotransmitters that act as the control switches for the body and mind.

Tryptophan has emerged as an important amino acid that is key in balancing mood and sleep. The body uses tryptophan to make both serotonin and melatonin. Serotonin is the amino acid well-known for contributing to a sense of calm and happiness, as well as influencing cognitive functions such as memory and learning.

Melatonin has earned the nickname, the “sleep hormone” because of its role in regulating the sleep/wake cycle. Tryptophan also is needed for metabolizing vitamin B3. Vitamin B3 helps keep heart disease at bay and is used for repairing DNA.

While most cheeses are “better-for-you” foods, a number of cheeses are particularly well-suited to include in products and prepared meals or meal kits. Fresh mozzarella is a perennially popular low-fat, high calcium and versatile cheese. It holds up well to baking as well as a fresh cheese in RTE meals. Lightly flavored, it lends itself well to pairing with such singular flavors as herbs, pesto, and flavored oils and vinegars, such as balsamic vinegar. 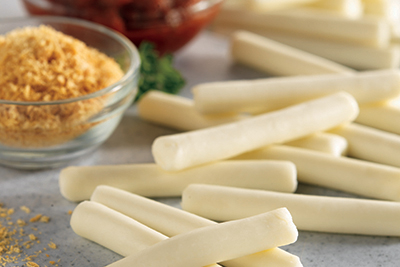 Firm mozzarella, such as string cheese, is another calcium-rich cheese that has become especially popular as a snack cheese. Most often available in single servings, it is a satisfying quick pick-me-up pre- or post-workouts. Often made with skim milk, it can contain lower levels of fat than many other cheeses. Blue cheese favorite in salads, salad dressings, and dips — is a unique cheese for healthful diets, having demonstrated an anti-inflammatory capacity as well as being a source of probiotics.

Feta, too, is a popular salad cheese and fits the global flavors trend perfectly, being a popular cheese across most of the Mediterranean culinary traditions. The addition of cracked pepper or herbs or even toasted spices, such as cumin, can transition it from Greek to Middle Eastern to North African in specialty products highlighting those ethnic flavors. 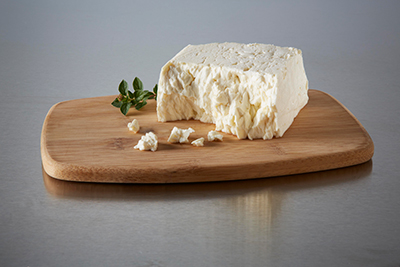 With cheese a versatile, satisfying, comforting, and on-trend food, product makers have a veritable library of ingredients to work from when creating cutting-edge, flavorful products for healthy lifestyles. Simply put, what our ancestors always knew has been proven correct: cheese is not only good, it’s good for you.